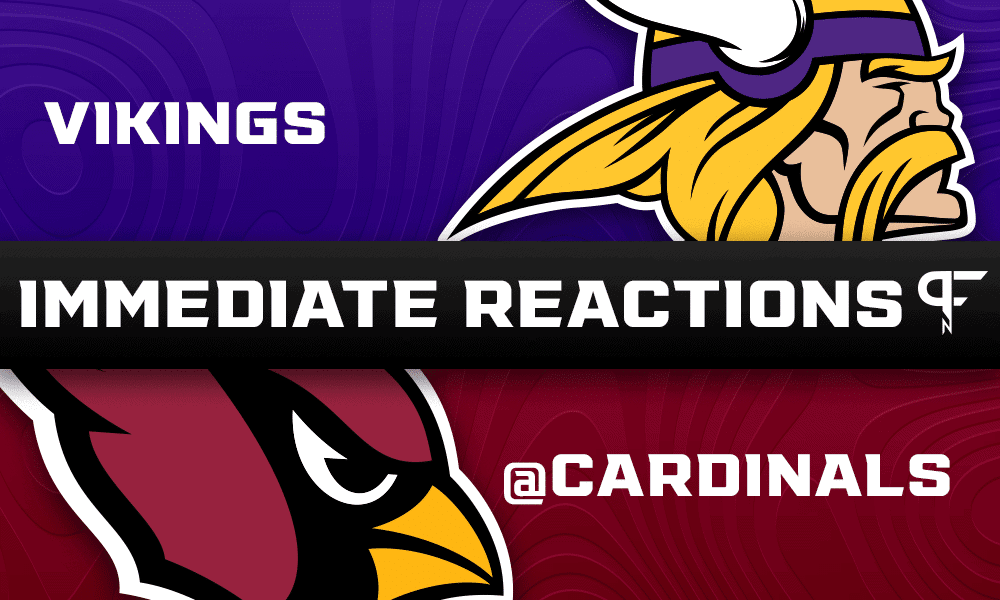 The Week 2 Minnesota Vikings vs. Arizona Cardinals game included the fireworks we thought it would. While Minnesota and Kirk Cousins came out hot early, Arizona and Kyler Murray found ways to move the ball when it mattered most. In the end, Vikings kicker Greg Joseph missed an extra point and a 37-yard field goal while time expired as the Cardinals held on for a 34-33 win.

Observations from the Vikings vs. Cardinals game

What were the biggest takeaways from the Vikings vs. Cardinals bout?

Every time former Heisman Trophy winner Kyler Murray takes the field for Arizona, you never know what to expect. For example, last year’s “Hail Murray” to DeAndre Hopkins to beat the Buffalo Bills. Today, we saw that same type of playmaker but with a couple of hiccups.

Much of today’s action took place in the first half. After Murray led the Cardinals’ offense from a 7-20 deficit to take a 24-23 lead into the half, he came out and threw a pick-six to Vikings linebacker Nick Vigil on the second play of the third quarter. On his next drive, he led an eight-play drive, finding former Bengal A.J. Green for a 9-yard touchdown. Then, on his third and final drive of the third quarter, he took a shot to the end zone, only to end with another interception to Vikings safety Xavier Woods.

What ultimately led to the game-winning drive ended after 10 plays and a 27-yard Matt Prater field goal. Murray ended his day 29/36, 400 yards and 3 touchdowns while adding another 31 yards and a score on the ground. On the season, he now has 689 yards and 7 touchdowns through the air 3 interceptions — 2 of which occurred today.

Murray has all the tools at his disposal to have an MVP season in head coach Kliff Kingsbury’s offense. Hopkins and Green are two reliable vets that he can count on week-in and week-out. And today, Murray established a connection with rookie wide receiver Rondale Moore, who finished the day leading the team with 7 catches, 114 yards, and 1 touchdown.

Dalvin Cook was the leading rusher in the NFL in 2020. Early in the game vs. Arizona, he looked like the NFL’s leading rusher should. After the offensive line struggled to give him running room in the Week 1 loss to the Cincinnati Bengals, they paved lanes against the Cardinals’ front seven early and often in the first half.

The second half wasn’t as kind to the Vikings’ offense as a whole. After scoring 23 points in the first two quarters, Minnesota’s offense scored just 3 points in the second half — the other 7 points coming from Vigil’s pick-six. Much of that had to do with penalties and Cousins’ inability to move the ball through the air, not Cook, who ended the day with 131 yards on the ground.

Cousins may have found another reliable target out wide in K.J. Osborn, who scored on a 64-yard pass on Minnesota’s first drive. After career highs in both catches (7) and yards (76) in Week 1, Osborn followed it up with another 5 catches and new-career high 91 yards this afternoon.

Vikings cornerback Patrick Peterson spent his first 10 seasons in the league with the Cardinals. This past offseason, Minnesota signed the eight-time Pro Bowler to a one-year, $10 million contract to help fix Minnesota’s secondary woes in Mike Zimmer’s defense.

When the NFL schedule came out, there was no doubt Peterson had Week 2 circled on his calendar, especially after the way Cardinals general manager Steve Keim handled his last days in Arizona. However, any type of revenge Peterson was hoping to get on his former team fell short. Over the course of the first half, Peterson gave up 2 touchdowns, one to DeAndre Hopkins and another in broken coverage to Rondale Moore which led to a 77-yard score right before the end of the half.