Is this the right time to trade away Chris Carson? 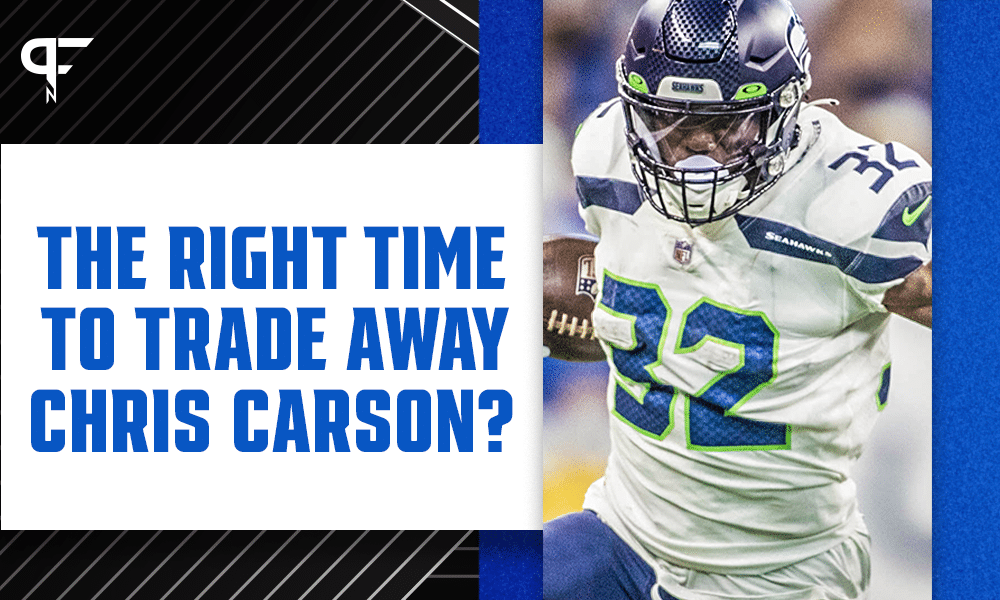 With one game in the books, we have reached peak overreaction season in fantasy football with managers ready to bail and trade away talented players. The fantasy football trade analyzer helps us look for potential targets that managers could be hitting the panic button on in Week 2. Additionally, it highlights players that you might want to sell before a downward turn in production.

With poor opening performances shifting the narratives, these players could be potential trade targets before Week 2 games are underway.

This whole offseason there was this feeling that Ezekiel Elliott was no longer being considered amongst the best RBs in the NFL, which is baffling to me. In five seasons, he’s finished as the RB2, RB12, RB5, RB3, and RB9, respectively. He averaged 1,276 rushing yards, 391 receiving yards, and 11.2 total touchdowns per season.

Then Week 1 came along, and Elliott bombed, rushing 11 times for 33 yards and adding 6 yards on 2 receptions. Yes, that was bad, but it was expected in a way. The Cowboys were taking on the Buccaneers, who have one of the best defenses in football, and many listed Elliott as a fade. If anything, it would have been more surprising if he played well.

Better days are ahead for Elliott, and they could start as soon as Week 2 when the Cowboys take on the Los Angeles Chargers. If you can swing a deal for Elliott at a discount, do it. He is a top-five RB in fantasy with a current market value closely resembling a second-round pick.

Many were already concerned that Najee Harris could be a bust due to the Steelers’ offensive line issues. Those concerns certainly were not quelled after Week 1. Harris totaled just 45 rushing yards against Buffalo. With that said, there is room for optimism.

For one, Harris played on 100% of the offensive snaps (58). That’s massive. Second, he had 20 opportunities — a volume that few players in the NFL can match. In fact, only eight running backs in 2020 averaged 19 or more opportunities per game. Of those who played in 14 or more games, which excludes Christian McCaffrey and Joe Mixon, all finished inside the top nine in PPR scoring last season.

The Las Vegas Raiders, who the Steelers play in Week 2, just allowed over 140 yards to RBs last week. With Harris likely to be on the field all game, he could have a massive week. Fantasy managers would be wise to get a trade completed before Sunday as his price will only go up from there.

In a game where the Buccaneers threw for 379 yards and scored 31 points, Mike Evans had a pedestrian 3 receptions on 6 targets for 24 yards. Leonard Fournette even had more targets (7), receptions (5), and yards (27) than Evans.

I would not stress over this too much. For one, Evans had the more difficult matchup with Trevon Diggs in shadow coverage, following him on nearly 80% of his coverage snaps. Also, Tom Brady is going to want to get him involved in the passing game.

For as good as Chris Godwin and Antonio Brown were, Evans is a critical part of this offense. You don’t have seven consecutive seasons of 1,000+ receiving yards by accident. He is a solid WR2 the rest of the season that could be acquired for WR3 prices.

Is there risk involved? Absolutely. But is the upside even greater? Unquestionably.

Now, I don’t want to fool you into thinking you are trading for the player that wore a Giants jersey and was a top-three WR in football. That’s not who Odell Beckham Jr. is anymore. Yet, he is one of the highest upside WR2/WR3s in fantasy.

Last year, the Browns were in their first season in a new system, and when you look at the film, Baker Mayfield and OBJ were on different pages. There is this narrative that Mayfield played better without OBJ. To me, this is an example of correlation not equaling causation.

Beckham Jr.’s absence did not cause Mayfield to play better. It was time in the system, and Mayfield trusting what he saw mid-play as the year progressed. It just so happened that Beckham Jr. had torn his ACL by then. The deep targets that Mayfield hit in the second half of the season were ones that he wouldn’t attempt to Beckham Jr., or they saw differently when reading over-the-top coverage.

Beckham Jr. has already been ruled out for Week 2, and odds are if the fantasy manager who drafted him is 0-1, they would be willing to listen. If they go 0-2, the odds of making the playoffs will drop even further, causing them to smash the panic button. Making a trade for OBJ now is gaining fantasy football success down the road when you need it the most.

Players to trade away

Coming off solid games and positive narratives surrounding them, it might be a good time to trade away these players to get maximum return.

I love Melvin Gordon this week. He is one of my favorite starts for Week 2 as the Denver Broncos face the Jacksonville Jaguars. The Jags allowed 36.4 fantasy points (third-most) to Houston Texans’ RBs last week. Gordon is also coming off a 100-yard game with a TD in Week 1.

With that said, it took a 70-yard TD in the final five minutes to give him that total, and he was out-carried by rookie Javonte Williams 14 to 11. This will continue to be a 50/50 split, and as Williams gets his legs under him, I expect him to eventually become the RB1 for the Broncos.

I would be looking to trade away Gordon while his value is at its highest. You could wait until after this week to do it or use his fantasy football matchup as a point in negotiations.

Chris Carson is one of the more underappreciated RBs in the NFL and fantasy football. Over the last three years, Carson has averaged 19.1 opportunities, 92.1 total yards, 0.66 TDs, and 15.5 fantasy points per game. He’s been an RB1 in 37% of his games and an RB2 or better in 74% during this stretch.

In Week 1, he saw similar success. Carson rushed 16 times for 91 yards, caught all 3 targets for 26 yards, and finished as the RB22 in PPR (12.7 points). His snap share was also through the roof following Rashaad Penny’s injury in the first half. Carson played on 78% of the offensive snaps and received 85% of the RB rushing attempts.

It’s not that I necessarily think you need to trade Carson away, but that you could get a significant haul in return before the floor drops out. He has two great matchups against Tennessee and Minnesota but goes through a gauntlet after that. From Week 4 on, he has matchups against the 49ers, Rams, Steelers, and Saints all in a row. Add in the Week 9 bye, and Carson has at best three “positive” games between now and Week 10.

While the Seahawks will be a good offense and Carson is at the center of the rushing attack, I would throw out trade offers to fellow fantasy managers to see who is interested.

The Jaguars are not a good football team. Can we all agree on that? While this usually leads to increased garbage time reps, DJ Chark’s Week 1 numbers are a bit peculiar.

Chark led the Jaguars’ WRs in volume with 12 targets but somehow only caught 25% of those, which is astronomically low. He ended the day with 3 receptions for 86 yards and a touchdown, finishing as the WR26 in PPR with 17.6 points.

This is unsustainable on multiple levels. For one, he will not see 12 targets every week. Secondly, nearly 30 yards per reception is absurd, and so is a TD on 33% of your catches. And third, and maybe most importantly, the Jaguars don’t get to play the Houston Texans every week. I would try to trade Chark, if I can, to someone who believes in him.

The NFL is better when Gronk is having fun. In Week 1, no one was having more fun than Rob Gronkowski. He caught all 8 targets for 90 yards and a pair of touchdowns, topping the charts as the TE1 on the week with 29 fantasy points.

But was this vintage Gronkowski or more likely a product of the game and it being Week 1? If we look back to 2020, Gronkowski only had one game of 90 yards+ and two with 6+ receptions. With Evans likely to see a higher focus by Brady, I expect to see that be the case in the red zone where Evans led the team in targets last season (18).

If you can trade Gronkowski for top-five or six fantasy TE value, I would do that in a heartbeat. From there, I would stream the position if you don’t have a better option on your team. Someone like Bears TE Cole Kmet would be the prime example in Week 2.