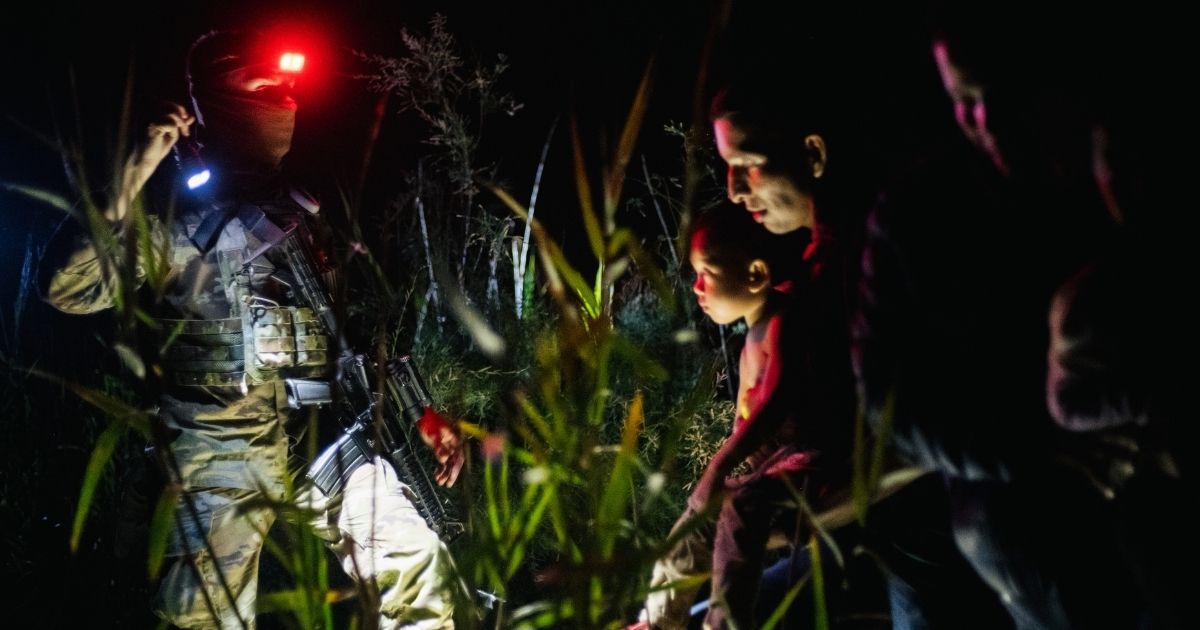 Fed up with the Biden administration’s lack of action on the border crisis in Del Rio, Texas, Republican Gov. Greg Abbott is taking matters into his own hands.

A mass migration of illegal immigrants — mostly from Haiti — has overrun the area around the city as a crowd of about 15,000 migrants has camped there.

“The Texas Department of Public Safety is in full force along the border around the Del Rio area. They have built a barricade with their squad cars and State Troopers. The National Guard is working with them to secure the border,” Abbott tweeted Saturday night.

The Texas Department of Public Safety is in full force along the border around the Del Rio area.

They have built a barricade with their squad cars and State Troopers.

The National Guard is working with them to secure the border.

Boeing Investigating After Discovery on New Air Force One Jet

That kind of action is needed, according to Texas Republican Rep. August Pfluger, who was in Del Rio on Saturday, according to Fox News.

400 more CBP agents are being sent to Del Rio and CBP is utilizing flights to repatriate Haitians back to their home country, but based on what’s happening on the ground, this is not nearly enough to tamper the chaotic situation.

This situation is dire. What I heard from CBP agents on the ground in Del Rio, TX is we have not seen the worst of it yet. The time for action is now. @POTUS MUST reinstate President Trump’s border policies.https://t.co/XZsDo3rKJl

The US is failing to protect its borders. Why aren’t you here? @POTUS

Pfluger said Haitians saw the Biden administration’s halt of deportation flights to Haiti as a signal that they could enter the U.S. without consequences.

Pfluger said the size of the crowd of illegal immigrants is a major safety concern.

“If they decided to riot or if unrest happened, it would be a terrible situation,” he told Fox News. “It is ripe. It is 100 degrees outside right now and you literally have 14,878 people here — this is how serious the situation is.”

Pfluger said most migrants were men between the ages of 18 and 35, with some families, including pregnant women.

“Where is the leadership?” Pfluger said, calling on the Biden White House to help beleaguered Border Patrol agents. “What is the administration doing? Why are they not down here right this second like I am?”

Do we need to return to Donald Trump’s immigration policy?

He noted that the White House has its priorities skewed.

“We’ve got a vaccine mandate in the United States for companies with 100 or more people, and we’ve got 14,878 people here — are you kidding me? Our priorities are completely out of whack right now,” he said.

Warnings of a growing crisis had been brewing in the days leading up to the mass crossing.

The migrants said they do not plan to leave willingly, according to The Guardian.

On Saturday, illegal immigrants walked back and forth across the Rio Grande, obtaining supplies in Mexico and then returning to the camp to share them.

PrevPreviousWhat Super Bowls Teach Us About Capitalism
NextWho and What Is Tearing the US Apart?Next