After leaving the town of Egilsstadir in Iceland’s northeast corner, the three of us drove along the least visited side of the country. We had another stellar day, overcast but with clear views of the mountains.

The east side of Iceland is quite rugged and the Ring Road winds through steep valleys and still snow-covered mountains. Note the fog in the valley bottom which was short lived. 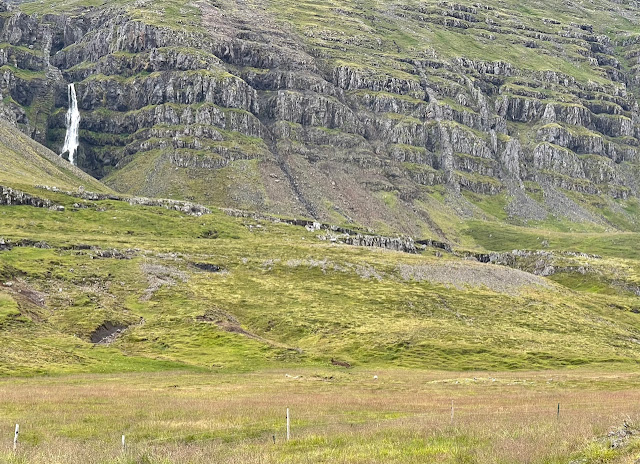 Layer after layer of late Miocene (about 9 Ma) basalt lava flows are seen on this stretch. Note the two vertical dikes on the right side of the photograph that stands out in erosional prominence and cut through the older lava flows. Other ravines in this view may also be the location of dikes that have alternatively eroded more deeply in to the flows. 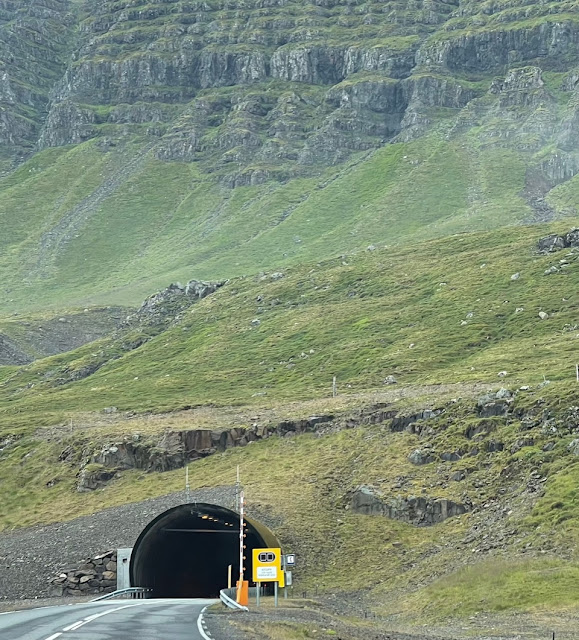 There are many long tunnels in Iceland that cut through the mountains to shorten driving times or bypass steep or often-snowbound stretches of road. This one is six kilometers (four miles) long. 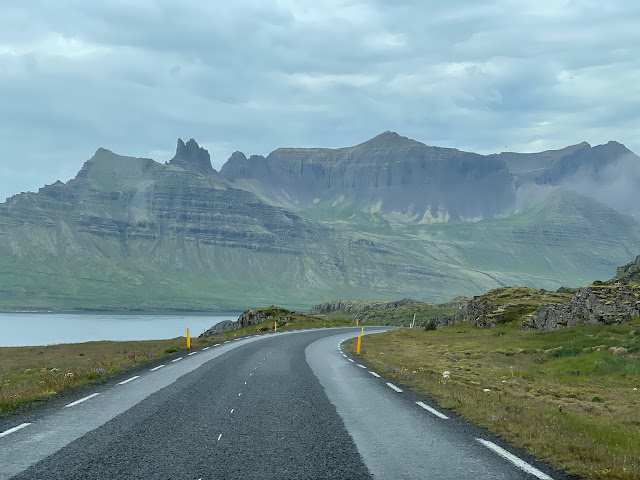 Where there are not tunnels, the road winds in and out of deeply set fjords. 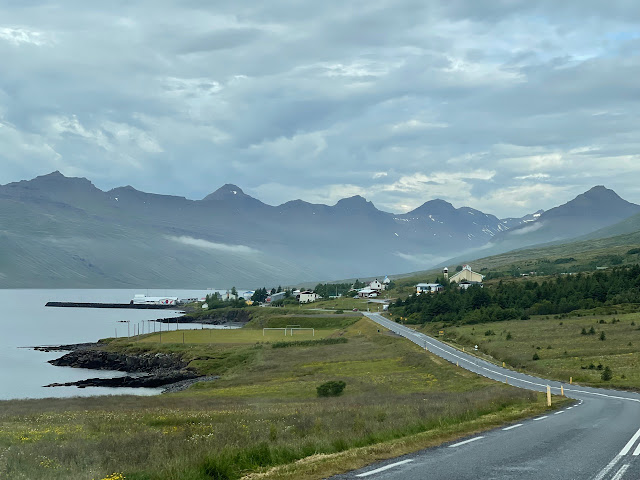 Small towns with only a few hundred residents are often seen along these deeply set fjords. 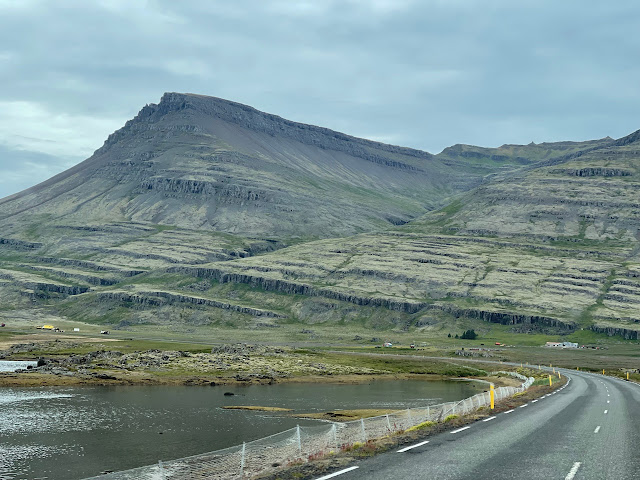 All around Iceland’s coast, the layered basalt rocks are tilted inward to the center of the island (and away from the sea). This is due to isostatic rebound being more pronounced along the coasts, where ice-free environments began much earlier at the end of the last Ice Age. In other words, the central part of the island is still being depressed from the weight of the still-existent (or recently removed) ice, while the coastal areas have been rebounding for longer periods of time. Amazing! 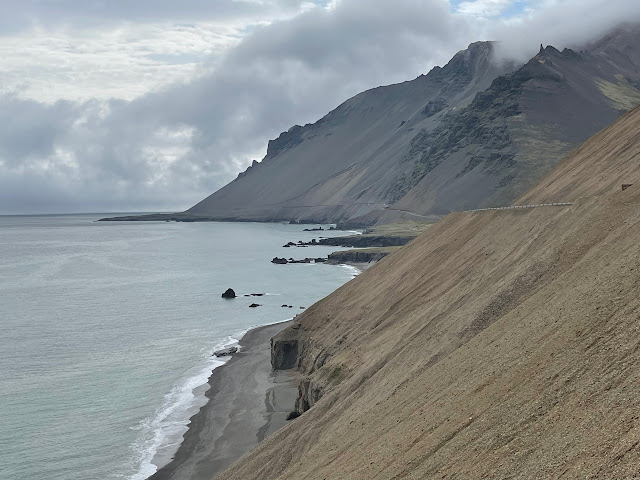 One place has scree coming directly to the coast right off of the mountains. A road was not constructed across this scree until the early parts of the 20th century.

After passing the town of Hofn, the road swings west to travel along the south coast. 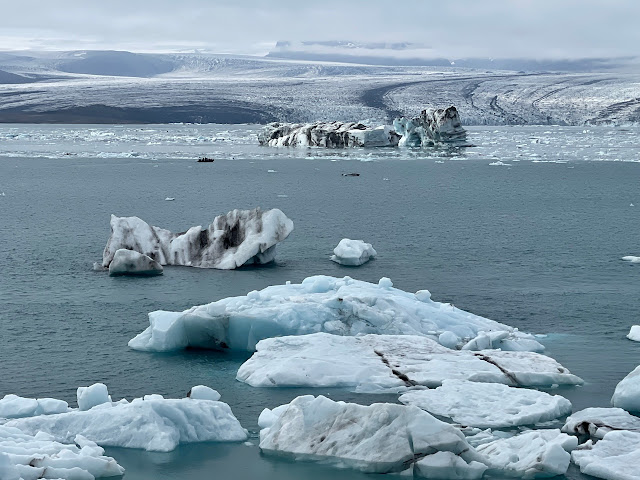 By now, you may have wondered, “Is there any ice in Iceland?” The answer is a resounding yes! Nearly 11% of land is ice-covered in 269 named glaciers. In the distant view here is the largest of them all called Vatnajokull. It is from this glacier that the outburst floods seen in previous blog posts came from (but directed to the north away from the glacier). Here on its south edge, huge tongues of ice spill from the mountains down to near sea level (the south coast gets much more precipitation than the north coast). Just 115 years ago, the ice here extended down to where the photos was taken, about two miles. The pro-glacial lake where the icebergs are floating was born only at that time as the glacier receded. 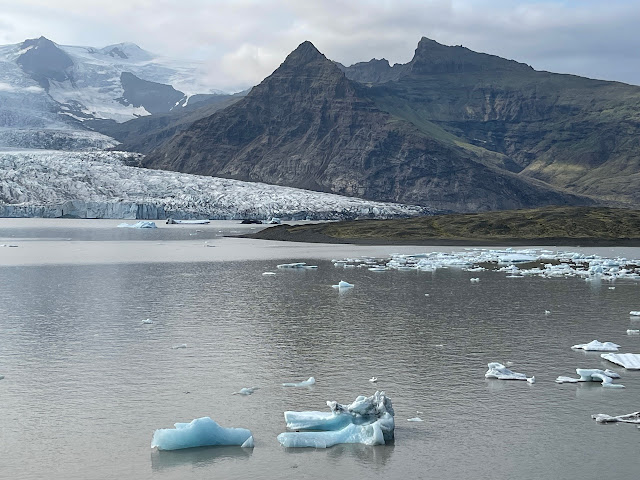 Another valley glacier was visited just a bit farther west. 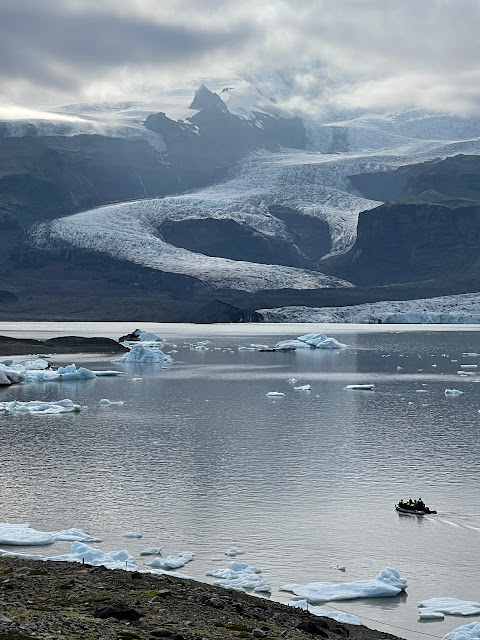 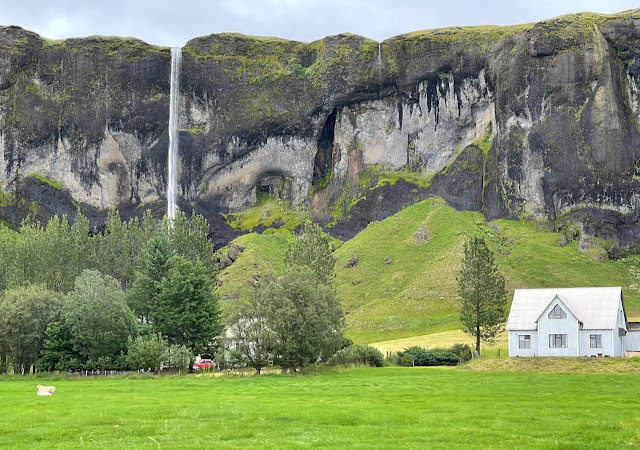 After passing the nearshore glaciers, the farm and waterfall scenes on the south coast return. 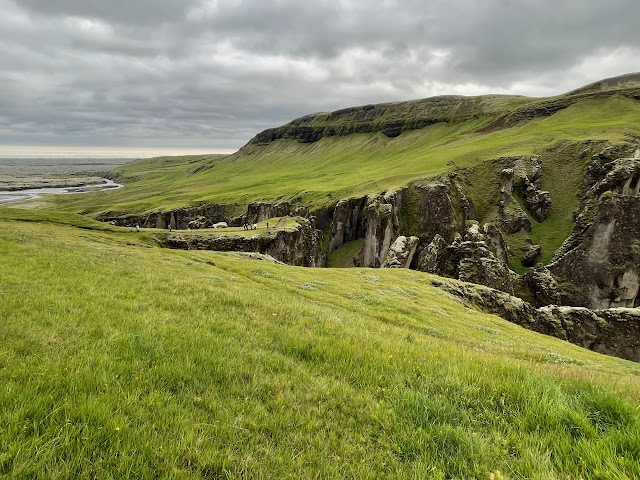 I had been hearing about a canyon along this part of the coast and decided to explore a bit and take a look. Luckily, I had two folks who by now were way into anything resembling “Exploration.” It turned out to be well worth it! 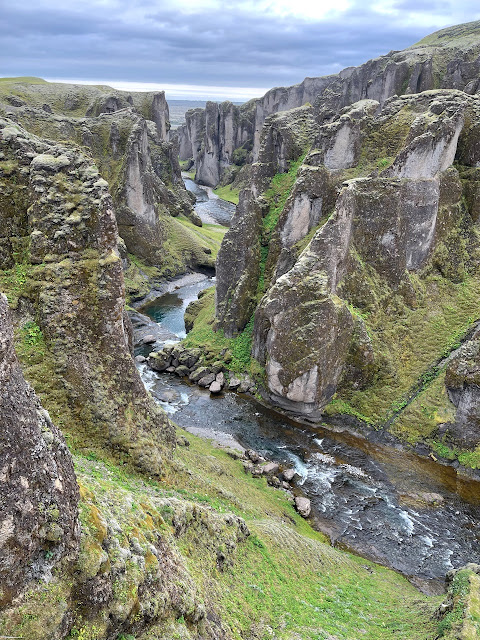 It is called Fjadrarglijufur Canyon and it slices through a sequence of palagonite, a volcanic rock that cools in the presence of water. Palagonite typically suggests eruptions in a subglacial volcano. 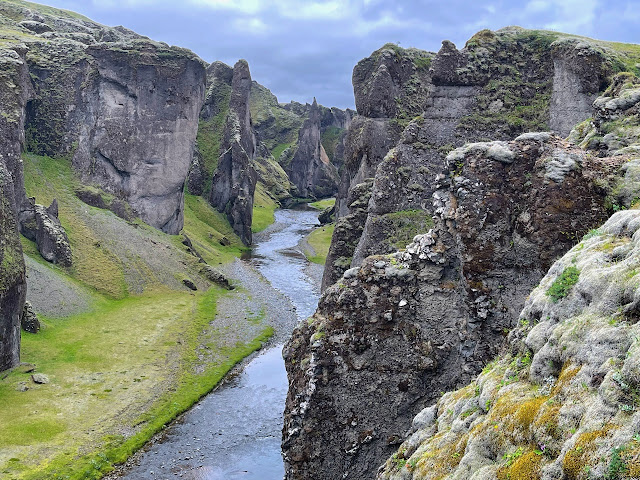 A beautiful scene looking down the canyon. 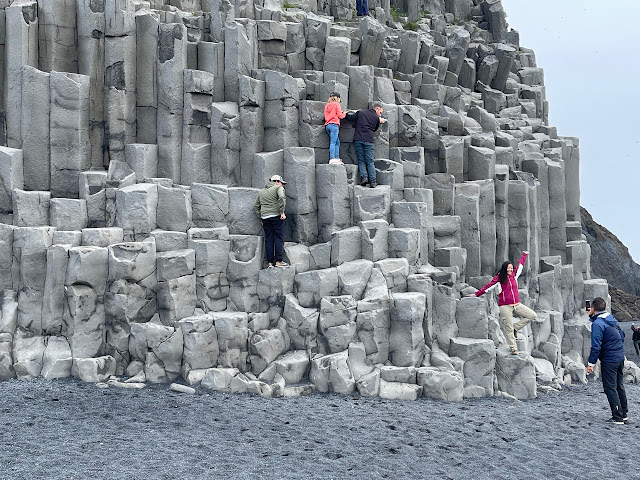 The basalt columns at Dyrholaey are visited by many who come to Iceland. The vertical columns are often six sided and formed when the lava flow cooled slowly. The columns are perpendicular to the cooling surface. 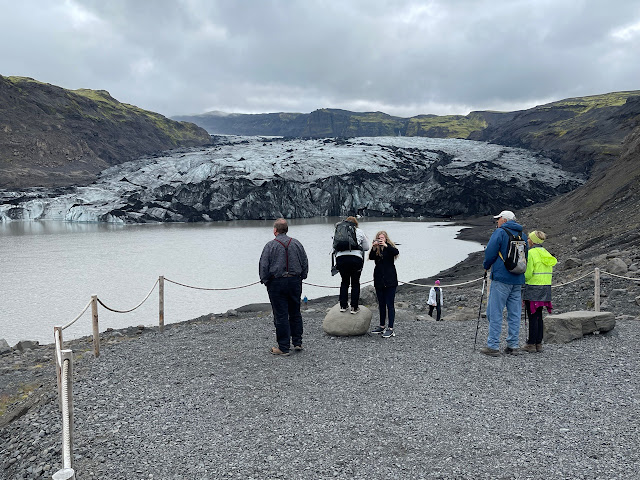 The Solheimajokull Glacier has also retreated about one mile in the last century. 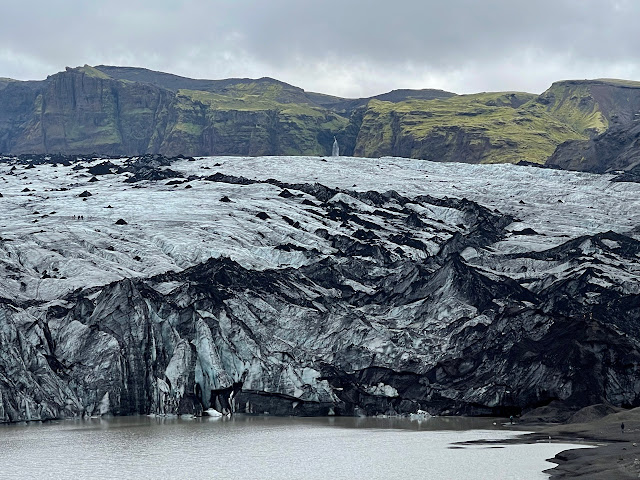 A medial moraine is seen snaking its way on top of the glacier and represents where two valley glaciers coalesced as they flowed downstream. 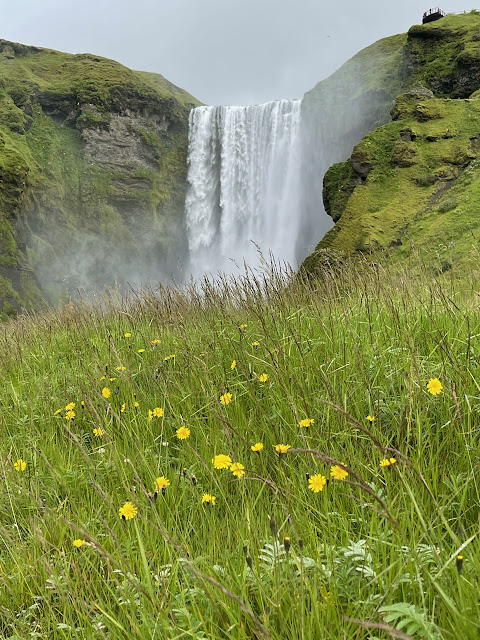 Skogafoss on the south coast. There are actually about 50 people looking at the waterfall but I placed my camera in a position where the nearby grass obstructed them. 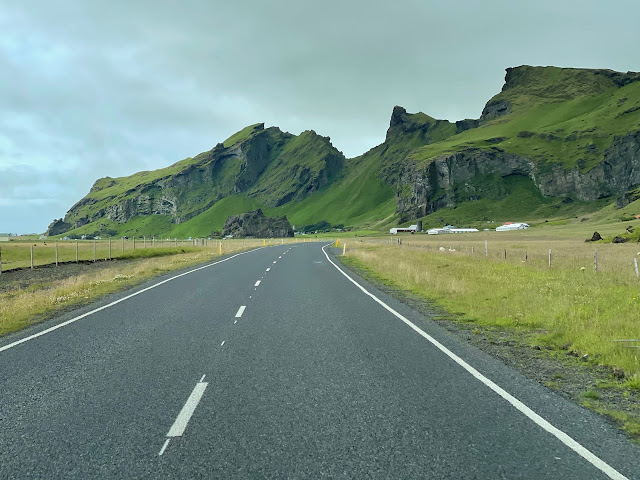 An eroded subglacial volcano along the Ring Road. Note the tilted beds of palagonite where the effusive material was trapped beneath the glacier and avalanched downslope. 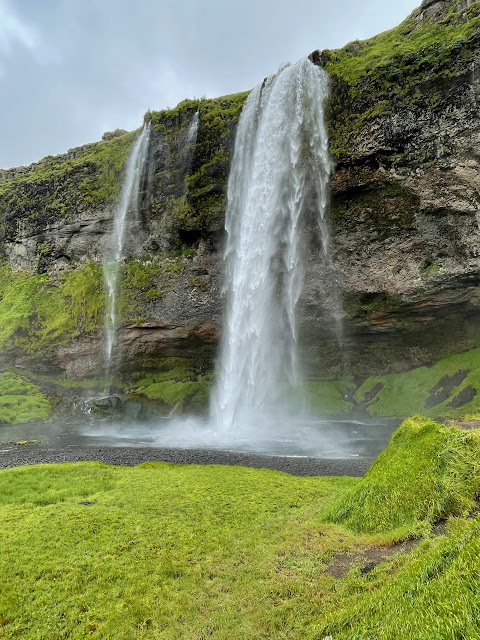 Seljalandsfoss was a final waterfall visited in a land of waterfalls! Some visitors to Iceland report having waterfall fatigue on their journeys. There are many! 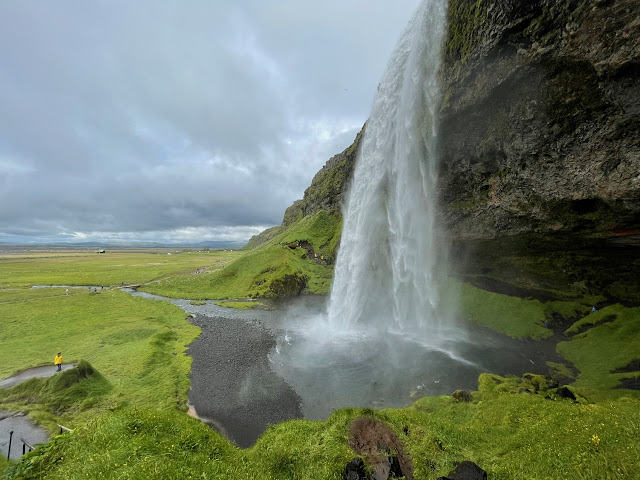 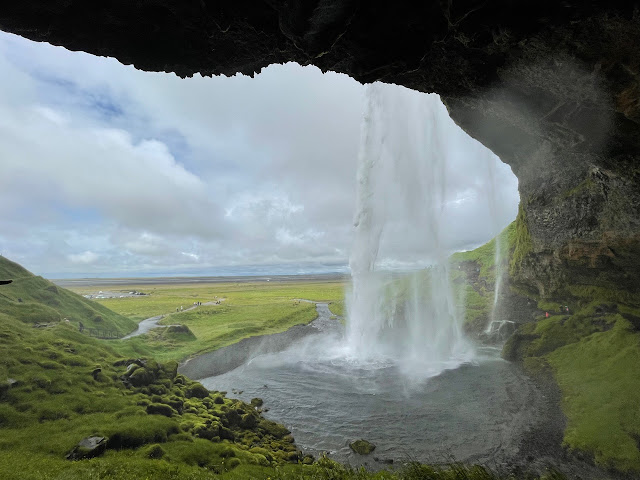 It’s possible to walk behind the falls. 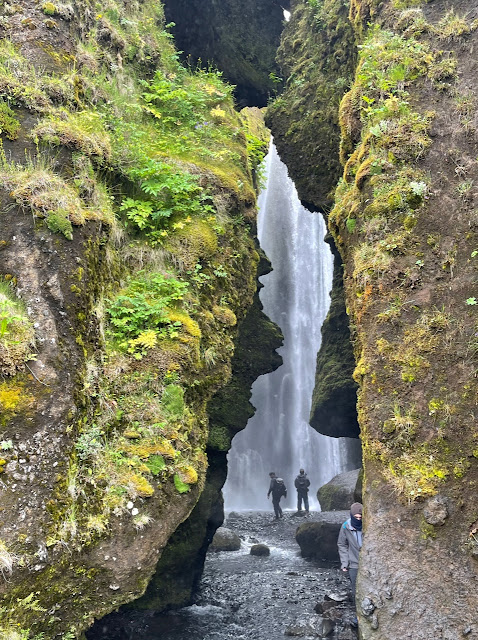 Nearby is a small slot canyon with an anteroom waterfall. 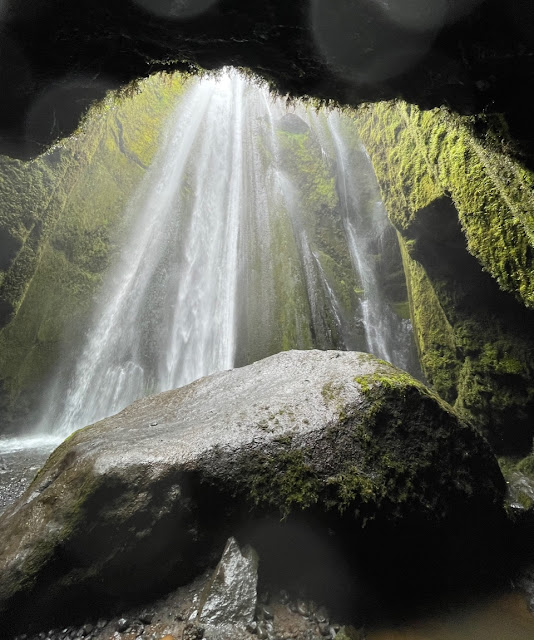 In the anteroom. Thanks for reading!