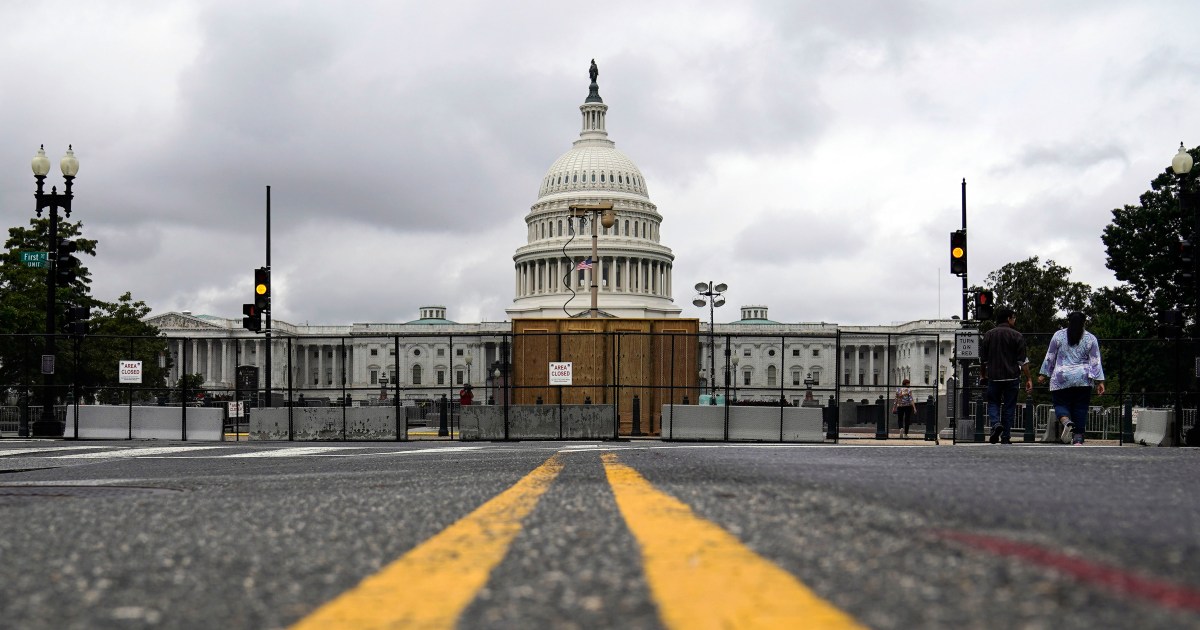 Security fencing is seen around the Capitol in Washington, Friday, Sept. 17, 2021, ahead of a weekend rally planned by allies of former President Donald Trump that is aimed at supporting the the rioters of the Jan. 6 insurrection at the U.S. Capitol. (AP Photo/Brynn Anderson)

Fight disinformation. Get a daily recap of the facts that matter. Sign up for the free Mother Jones newsletter.

Depending on your news habits, you might think that we’re on the precipice of another January 6th-style insurrection. “Capitol Police memo warns of potential for violence during September 18 rally,” reads one CNN headline about Saturday’s “Justice for J6” right-wing rally, which is being organized by a former Trump 2016 campaign staffer. “The Capitol Will Face Its Biggest Security Test Since Jan. 6 On Saturday,” reads another from NPR.

After being severely underprepared for January 6, law enforcement is taking a much more risk-averse approach this time around. But some extremism researchers are frustrated with what they see as exaggerated coverage of potential violence. “Not every far-right rally in DC is going to be a repeat of J6 and constantly invoking those comparisons does not make anyone safer or help anyone understand the dire issues at hand,” tweeted Jared Holt, a research fellow at the Atlantic Council’s Digital Forensic Research Lab, which tracks far-right activity online.

Several days earlier, Holt wrote a piece airing his qualms with mainstream coverage. “It feels they have learned nothing about covering this space,” he wrote. “This is not to say that the event will not carry an inherent risk of attracting extreme believers, or even some with a violent disposition… But suggestions that organized extremist groups are mobilizing at any major scale around this event are unsupported by current analysis.”

“It feels they have learned nothing about covering this space.”

“Editorial decisions like these and the repeated bad framing I’ve seen all week give me the impression that outlets, even those who have consulted experts for stories and on-air segments, haven’t actually been listening to what experts are telling them,” Holt elaborated over text message.

Other extremist researchers agree that there’s still not much to suggest that Justice for J6 will approach anything close to the insurrection.

In the lead-up to January 6, finding violent rhetoric and plans was easy. Even moderately savvy internet users easily dredged up example after example. Not now. The most pervasive message from high-profile right-wing figures like Ron Watkins of QAnon and 8chan fame, pro-Trump lawyer Lin Wood, along with groups like the Oath Keepers and Proud Boys, has been to wave their followers off, calling the protest a potential “false flag” operation. In other words: a government setup.

“We have seen the hype about [Justice for J6] swirl to a truly bizarre degree,” Michael E. Hayden, a senior investigative reporter at the Southern Poverty Law Center, told me. “We are not seeing indications that this will be an event that draws big crowds of far-right extremists.”

“We absolutely have to take the ‘political prisoners’ rhetoric seriously,” Hayden said, referring to the popular notion on the far-right that insurrectionists have been wrongly imprisoned for political reasons. “Same for the propaganda painting Ashli Babbit as a martyr.” he said, noting that this type of rhetoric can spur on violence. “What you don’t want,” he qualified, “is the media willing to exacerbate a date like this by adding hype or repeatedly amplifying the grievances of would-be terrorists.”

The problem for Holt and others is a lack of nuance. “[I] don’t think likening the upcoming events in DC on sept. 18 to jan. 6 helps anyone, and that comparison certainly doesn’t hold up in terms of the chatter online,” Hannah Gais, a senior researcher also at the Southern Poverty and Law Center, tweeted on September. 8. The difference, she pointed out, was that there had been right-wing violence and at rallies in D.C. during the lead-up to the January 6 riot. No equivalent pot has been simmering and waiting to bubble over in the same way. Another big difference: There’s no longer a leader in the White House tacitly condoning their actions in a way that hints at potential amnesty.

it’s easy for people who weren’t in DC to forget this, but jan. 6 came after weeks upon weeks of right-wing violence and rallies building up to that point. organizers built up to the insurrection for months. the “big lie” supporting the attack was trumpeted by the white house.

Erasing nuance can also pose real-world risks, these researchers say.  “What is frustrating about disproportionate media hype like this is that it distracts from the very serious threats we face right now from the far right,” Hayden said. “And potentially gives ammo to the propagandists who seek to minimize or cover up a growing neofascist movement in the U.S.”

Even though researchers are cautiously optimistic that there won’t be violence near the Capitol on September 18, police have said that they’re not taking any chances. “The American public and the members of Congress have an expectation that we protect the Capitol,”  U.S. Capitol Police Chief Tom Manger said during a press conference on Friday. “And I’m confident with the plan we have in place that we’re gonna be able to meet that expectation.”