Earthly Musings – My Travel and Geology Blog: Popular Articles and a Scientific Paper About The Great Unconformity in Grand Canyon 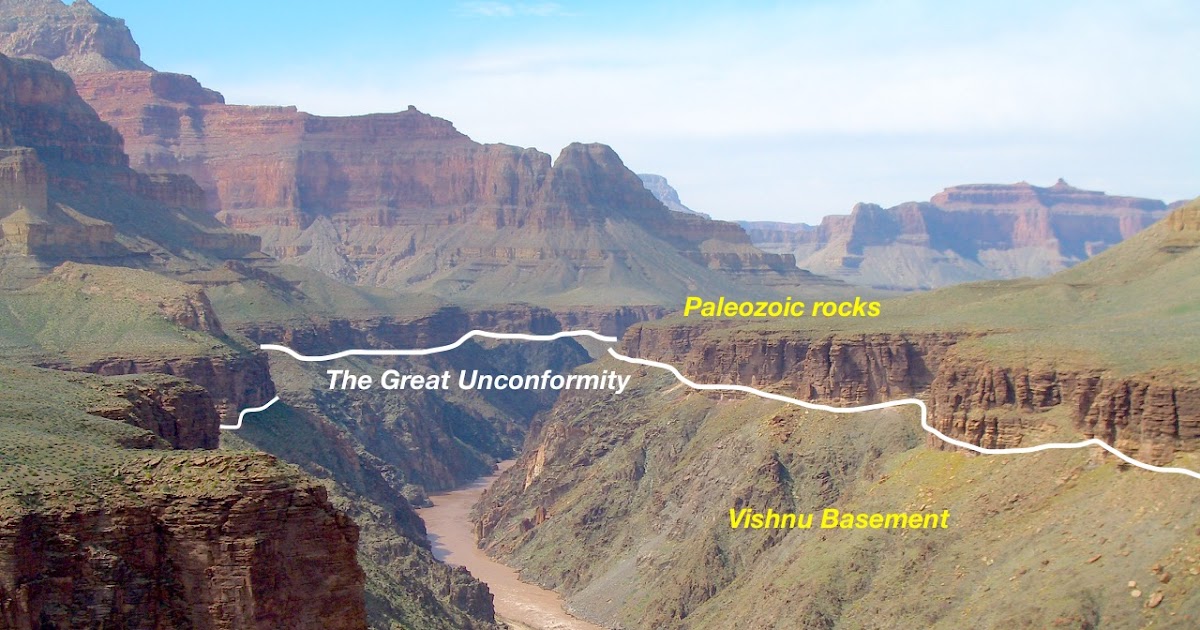 If you’ve been on the internet recently, you’ve probably run into a newsfeed about research done on The Great Unconformity in the Grand Canyon. Popular articles can be found in The Daily Mail (UK), Forbes  Magazine (US), and many other outlets that have picked up on the juicy theme (anything about the Grand Canyon always seem to sell to publishers).

I’ve received numerous queries about the substance of the scientific study, titled Zircon (U-Th)/He thermochronology reveals pre-Great Unconformity paleotopography in the Grand Canyon region, USA. The paper was published in the journal Geology by the Geological Society of America. The lead author is Barra Peak with second author Dr. Rebecca Flowers (and two other colleagues, all from the University of Colorado, Boulder or the University of California Santa Barbara).

The popular articles seem (to me) to have missed the main findings of the study. They use flashy-sounding keywords that have little to do with the substance of the study (themes around John Wesley Powell, Rodinia supercontinent, tectonic plates, and faulting). These are pieces of the story but very little is mentioned of the main results of the research and what that means to Grand Canyon geologists.

I do not fault (pun intended) the authors of the popular articles for their lack of clarity or deeper understanding of the main thrust of the scientific study – this is a really complex topic. Still it might have been better if someone more attuned to the canyon’s overall geology could have been called upon to write this article. Geology is a tough wall to climb. I am happy for the authors of the study to have had their research so widely and generously exposed and I don’t want to diss anything that promotes geologic thinking!

My purpose of this post is to explain more clearly to those interested what the study reported on. Short answer to those who know Grand Canyon geology – they said that the Grand Canyon Supergroup was not deposited in the western half of Grand Canyon. This is something that previously could not be known. An alternative idea is that the Supergroup rocks were deposited and present at one time across all of the Grand Canyon region, but were then eroded away in the western half before the Tapeats Sandstone washed over the entire region beginning about 508 Ma. This study would seem to eliminate that scenario.

I include below Figure 4 from the study. Four time slices are displayed, A) 1255 Ma; B) 1100 Ma; C) 800 Ma; and D) 510 Ma. The horizontal representation extends from eastern Grand Canyon (near the Little Colorado River) on the right side, to the Grand Wash Cliffs in the west and on the left. The pink color denotes the Vishnu Basement rocks, yellow denotes the Unkar Group (Lower Supergroup), and red is the Chuar Group (upper Supergroup).

The scientists studied the cooling history of the rocks. When rocks are deeply buried they are hot but as erosion removes what lies over them (their cover), they become cooler and a technique has been developed that can “see” when the rocks progressively cooled. This is called thermochronology (literally temperature clock). The Vishnu Basement rocks in western Grand Canyon revealed to the authors of the science paper that they had not been deeply buried while he Supergroup was being deposited in the eastern half of the canyon. This could be explained by them never being deposited there. Note how the yellow and red is confined within a down-faulted basin. located between the Butte and Sinyala faults. Apparently, the Vishnu Basement rocks revealed that they were buried by the Supergroup in this area. 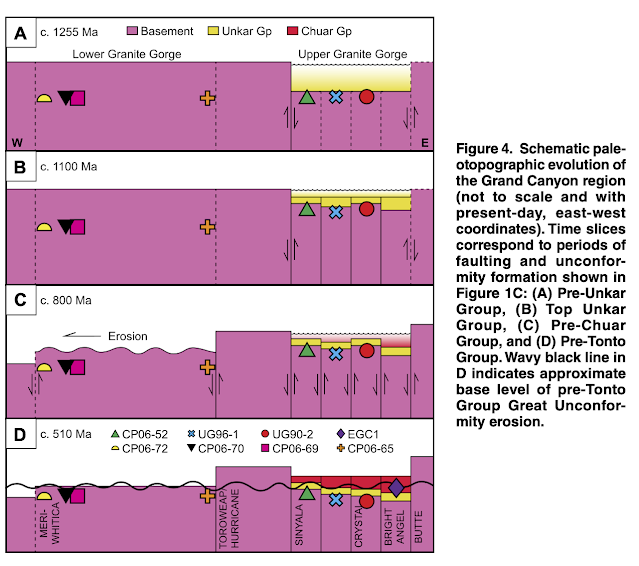 I am not an expert at all in the methods and interpretation of the thermochronologic methods. However, an initial question I would have for the science authors is, can a mile-thick sequence of strata and volcanics (the Unkar Group) really abut a fault and completely pinch out against the Sinyala fault? Might that be more a function of the modern preservation of the Supergroup?  The authors are confident enough in the technique to publish their findings. Time will tell how others in the scientific community respond to this study. For the time being, it does provide something to think about.